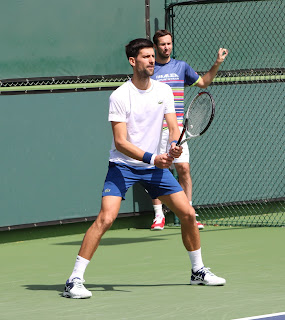 Djokovic to make a strong push at BNP PARIBAS OPEN

Recently working with coach Radek Stepanek and Andre Agassi, the pressure is on for Novak to have a good performance at this weeks BNP Paribas Open.

The draw is missing one very notable name in Rafael Nadal. Nadal is out with a hip injury and his return to the tour is still unknown.

Novak himself is returning from an elbow injury that sidelined him for the last 5 months of 2017. His return at the Australian Open was uneventful, losing in the round of 16 to up and comer Chung Hyeon of south Korea.

In watching Novak on the practice court today, his strokes looked like the Novak we all know and love, however he didn't seem well. Consistently blowing his nose and asking for a towel, Novak looked as if he was fighting off a cold. Lets hope it is nothing too serious and he is able to give his best effort this week.

Federer comes off his defense of his Australian Open title and is the favorite to take the BNP Paribas Open although there are several players who have a legitimate shot at stopping Federer's run. Stay tuned for exclusive pic, videos and behind the scenes look at the BNP Paribas Open.